Well, I had all good intentions of writing a regular blog about our work at the nursery and Cheriton Cottage: but it didn't happen. There are only so many hours in the day and I ran out of time. I am leaving the past blogs here so you can read them but, I don't envisage that there will be any new ones. A big Thank You to those of you who sent me such nice comments. You can follow us on Instagram and Facebook.

A friend once described February as the morning after an all-night party: it's half past four in the morning, you're tired, hung-over and would really like to go home now, and the wait is so boring. This is such a good analogy of how I feel right now. I just can't wait for the new season to really 'kick in'. However, it does give us time to walk around the garden and take stock. Throughout the year we take photos as a reminder of areas that worked well and planting schemes that didn't match up to our expectations. Over the winter months we review theses photos and make plans for any changes needed. Hopefully, you have done this also and can now think about re-designing some of your borders and ordering seeds. Now is a good time to prepare sweet-pea beds, and in sheltered spots, erecting the supports. If, like us, you didn't manage to find the time to remove all the old leaves from Hellebores, do it now! Take care to avoid the new and emerging flowers. Not only does it mean that you can better view the flowers, but it removes any diseased foliage.

We use a lot of natural supports throughout the garden borders: Hazel being the best. I'm always cursing, in the summer, as I never seem to have put in enough. This year I will have plenty. We have cut, collected and stored Hazel from a fallen tree in the wild area. 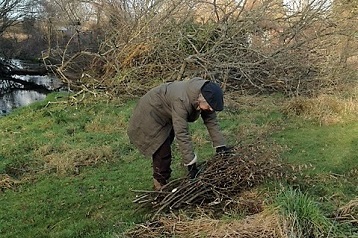 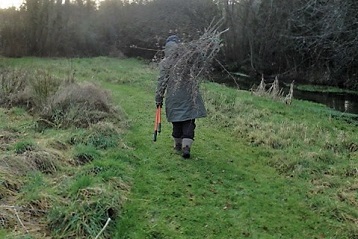 Tried to get a romantic picture of me walking off into the setting sun!? My fingers were frozen and I'm covered in mud. Ah! The joys of gardening. But on the walk back to the garden, I did make time for a quick tree hug. 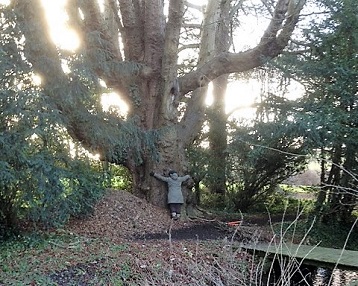 This beautiful Aesculus hippocastanum (Horse Chestnut) was planted in the late 1700s. It always comes into leaf later than the other Horse Chestnuts and perhaps that's why it seems to avoid the dreaded leaf miner that has become such a problem. Exceptionally attractive when covered with its stout candles of flowers, white with a yellow then red blotch. Providing the familiar conkers of children's games in autumn.

It's the time of year that many of us choose not to go out in the garden. But trust me, if you can drag yourself out there, wrapped up warm, on those dry, crisp days. it lifts your spirits. At Cheriton Cottage the Crocus, Eranthus, and Ipheions are emerging from their dormancy and there are thousands of Galanthus (Snowdrops) everywhere! Close to the house wall, we spotted two of the highly-scented Iris unguicularis (commonly called Iris stylosa). 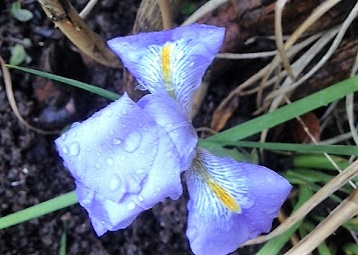 We have been busy finishing the winter pruning of shrubs, thinning out and removing diseased and dying branches. The young, straggly shoots of the Wisteria have been cut back to within three buds of the old wood. We finally finished the Apple Tree pruning last week! 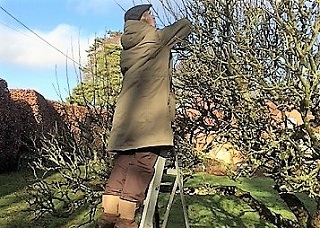 We try not to be too tidy in the garden, always leaving some dead tops on herbaceous plants in the borders and small piles of leaves here and there. Many beneficial insects and their larvae take shelter here over the winter months. In our own garden, we leave everything until late spring, especially hollow stems for the ladybirds and lacewings. But it is time to tackle those early annual weeds, and to start digging out those persistent perennial weeds: a job done now means less work in the summer. 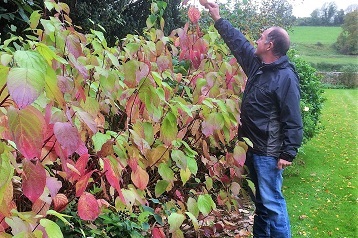 Once the leaves had dropped the beautiful, red stems brightened the winter months. 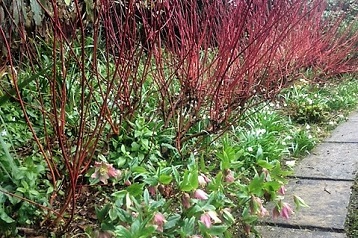 In March we cut the stems back to the ground and the Leucojums come into full view.

Apologies to those of you who looked forward to reading the blog: it didn't happen! Last year proved to be the busiest we have ever experienced. The benefits of a five minute slot on Gardeners' World has been unbelievable: there has not been a minute to spare. My New Year's Resolution is to try and write at least once a month.

There seems to have been a bit of a mix up in the editing of our little piece for Gardeners' World. Many of you spotted the glaring mistake. Andy was talking about Kalimeris mongolica and the image shown was of him holding Eurybia divaricata (formerly known as Aster divaricata). We had purchased a small pot of Kalimeris mongolica (Ghengis Khan Aster), back in early spring, from the lovely Jack and Laura of 'Wildegoose Nursery' home of 'Bouts Violas'. We potted it on and Andy took cuttings and it went on to perform beautifully. This plant promises to be a real 'good doer'. It started flowering in July and went on into Autumn and there were no signs of the mildew that often attacks Asters. So to eliminate any confusion.....

Toward the end of summer we were lucky enough to be visited by a budding daisy expert, Maddie. On holiday, from Australia, she called in at the nursery to put the record straight. Like many of you, Maddie did get distracted by our beautiful unnamed Helianthus. The one that we dug up and gave to customers who were determined to have it, even though it came with a 'severe, thug warning' from us. 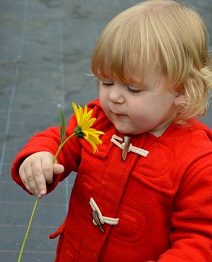 Like many of you, Maddie mesmerised by the bright yellow Helianthus. 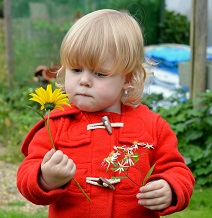 Maddie, with Eurybia divaricata, but still mesmerised by the yellow Helianthus. 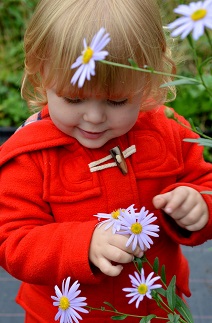 Finally, Maddie gives a big 'thumbs up' to Kalimeris mongolica

We do hope that Maddie has helped to put right any confusion regarding Kalimeris mongolica and Eurybia divaricata (formerly Aster divaricata).

Scroll down for further blogs. 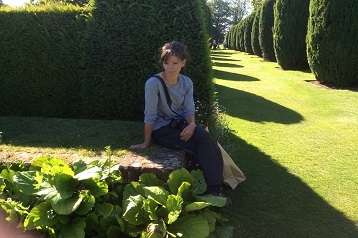 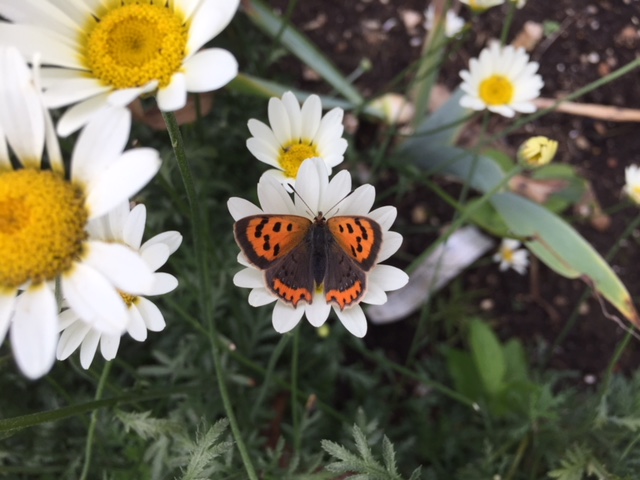 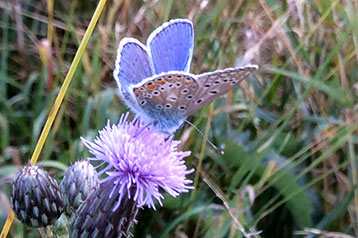 Poly tunnel at The Nursery 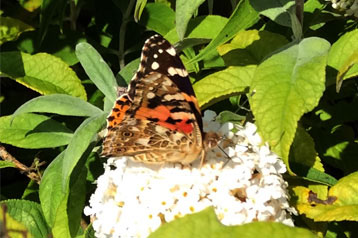 How to meet us

Open every Thursday, Friday and Saturday 10am to 5pm.

Other times by appointment